This page is a design guide on how to adjust content placement (layout) and display area (clipping and screen scrolling).

In order to bring out the three-dimensional space of the virtual object, you may want to place clues to recognize the rectangular virtual space (SR Display view space) described in the introduction.

First, let's place the floor surface so that the bottom stand and the contents inside are connected to each other. By making the floor surface of the virtual space and the real floor surface (the stand) appear to be connected, you can feel that the floor surface in the space is placed correctly and horizontally, which gives a more realistic representation. Also, by placing side walls that are aligned with the left and right side panels in the virtual space, you can create a sense of unity between the real world and the virtual space, and you will feel as if the square box exists on the spot. It is also easier to feel the rectangular region by placing a virtual wall at the back of the rectangle.
In this way, the physical surface or shape of the real world and the surface of the virtual space are matched as closely as possible so that the physical parts become "clues" and the expressive power of the three-dimensional space is enhanced.
Of course, depending on the world and content you want to achieve, this may not be the case, but if you always keep in mind where to place the "clues" that give you a sense of space, you can increase the ability to express space in a box-like manner, and at the same time, you can achieve a natural look that is less tiring for the viewer.
You can also create natural content that is easy to view by arranging the content to be displayed in this SR Display view space square box as much as possible. 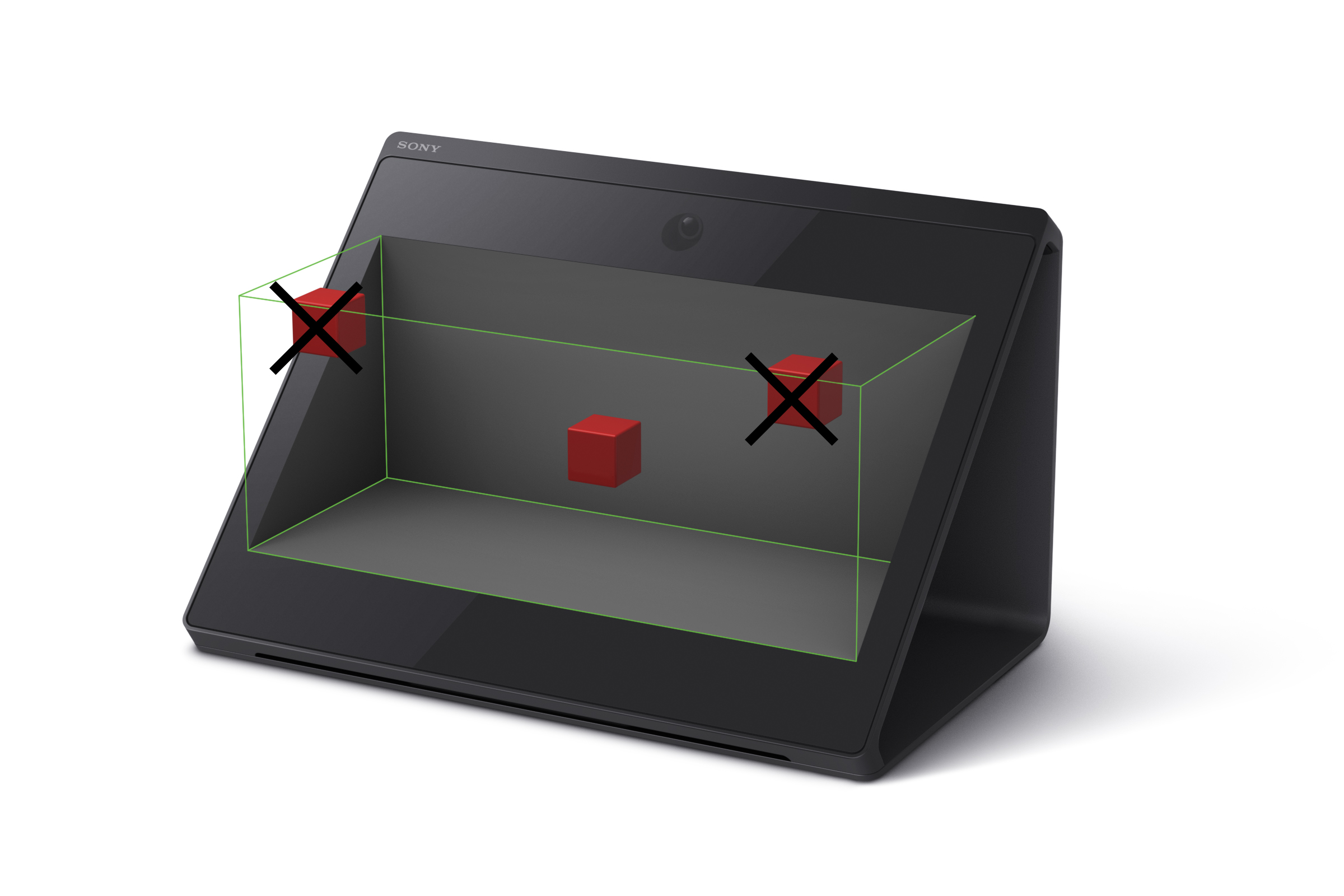 If there is a possibility that objects are unavoidably placed at the left and right edges of the screen, such as in an animated presentation with motion, you may want to use, for example, Vignette, to make the parallax disappear gradually as the video approaches the edges of the screen.

How to use the front and back

Placing an object beyond the rectangular virtual space (SR display view space) makes the object appear to jump forward, creating more impactful content. However, if you continue to show objects jumping forward for a long period of time, the viewer's body load will increase.

In addition, avoid using too many expressions in the direction of depth, which are extremely distant, since they are difficult to fuse and may cause sickness for some people. On the other hand, rendering large depths is difficult to fuse, and should be avoided.

By creating a natural three-dimensional space by ensuring that the main object is placed on the physical display surface and placing sub objects at the front or back, we can provide a comfortable, less tiring viewing experience.

As mentioned above, placing the objects to be displayed in the SR Display view space is ideal for achieving an easy-to-view display. However, depending on the world or content you want to express, you may want to provide images that go beyond the rectangular area of the SR Display view space. In this case, you need to be careful not to lose any objects that protrude from the image no matter where they are viewed. Depending on the viewing position, objects placed outside of the SR display view space may be prone to chipping, leading to a decrease in three-dimensional effect and visibility. In order to avoid this problem, it is also effective to automatically clip objects on both sides of the display view space.

Learn more about the clipping process with the SDK Spactial Clipping.

Movement of the display area

If the entire three-dimensional space displayed by the Spatial Reality Display(SR Display) is moved around a lot, the physical burden of eye fatigue and 3D motion sickness will increase during viewing. The content that is easiest to view on the SR Display is the content that has a fixed three-dimensional space, which is presented in a box-like manner. Because there is no parallax change other than motion parallax caused by user movement, it is difficult to feel fatigue or discomfort. The basic idea is to move individual objects or characters in the space with the entire screen fixed in this way.

Translational movement of the display area

Depending on the content you want to express, you may want to scroll or move the entire space. Moving the display area can create a dynamic viewing experience, but it can also create a physical load that can induce nausea.

If you want to move the entire display area for the purpose of presentation, it is recommended to limit the direction of movement to one direction, e.g., only in depth or only horizontally. Complex movements such as moving in two directions or rotating at the same time should be avoided as much as possible. While this allows you to create a dynamic image, like the camerawork in general motion pictures, it can also be an intoxicating experience for some people. Avoid extreme changes in angle of view and large motions and move smoothly and slowly.