Sony products that have been active at music production sites

Sony was founded in 1946. Alongside consumer devices such as TV and video, cameras, and game consoles, the company has introduced various professional audio equipment such as microphones, DATs, MTRs, and effectors, garnering the trust of numerous musicians and engineers as a manufacturer with a distinct presence in the music industry.

Around the time of its founding, business around tape recorders was the driving force behind Tokyo Telecommunications Engineering Corporation. Manufacture of transistors was also going strong by the time they changed our company name to "Sony Corporation" in 1957, and the "Sony" brand name had already spread widely around the world. While working on microphones for recorders, Sony became the first domestic company to delve into the field of condenser microphones, which, at the time, was overwhelmed by foreign products. C-37A, introduced in 1958, became the first domestic vacuum tube condenser microphone, and also this became the first of Sony's professional products.

Dr. Heitaro Nakajima, led the production of C-37A. On the verge of the Tokyo Olympic Games in 1964, he conducted research and development of a variety of equipment and was also involved in the prototyping of condenser microphones as the general manager of Sony's commercial audio equipment development. Vacuum tubes with low noise were employed in condenser microphones at the time, and mainstream German microphones employed the triode AC701. However, since this was high-cost to mass-produce, C-37A employed a pentode vacuum tube called 6AU6. It was possible to check its operation by connecting the grid to the plate for use as a triode tube, which allowed the mass-production of C-37A.

C-38 was released in 1958 as its younger brother, inheriting such specifications on-board the C-37A as the -8 dB PAD and low-cut. This unit underwent minor changes to become C-38B in 1970. This equipment employs, in the head amplifier, a low intermodulation distortion circuit applying FET, which realizes a sound pickup effect with low distortion even at a high volume input. It also features a two-way power supply system comprising a phantom power supply and a battery (006P). C-38B is one of Sony's leading microphones, still manufactured as an existing product more than 50 years after its introduction.

Condenser microphones that appeared about 30 years later in 1992 are the two models of C-800G and C-800, equipped with large diaphragm capsules. C-800G consists of a dedicated power supply unit and a main body, the body being a cylindrical type with a diameter of 57 mm and a height of 191 mm, and a vacuum cooling mechanism is attached to its back surface. As a result, noise and distortion in the low / high frequency range are reduced, realizing extension and purity of sound. Although C-800 was discontinued in 2002, C-800G was renewed to become C-800G/9X, which is still being used as a standard microphone in recording studios around the world. The recently announced C-100 was developed as a microphone inheriting the form of C-800G but with a compact size, and also introducing new technology. 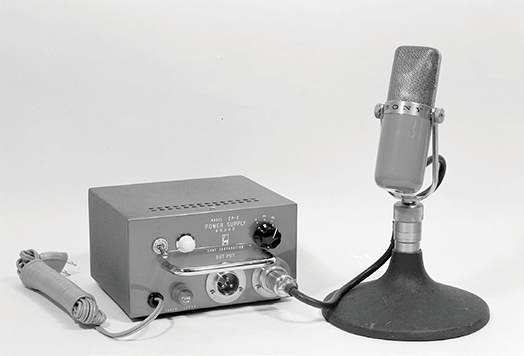 C-38B is still indispensable for the recording of Japanese instruments 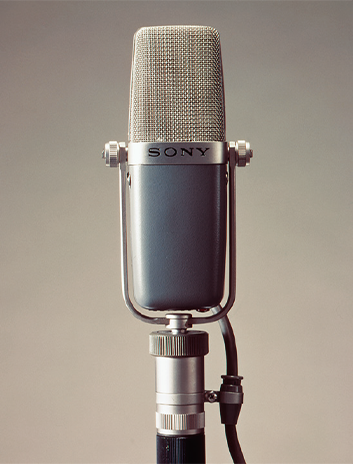 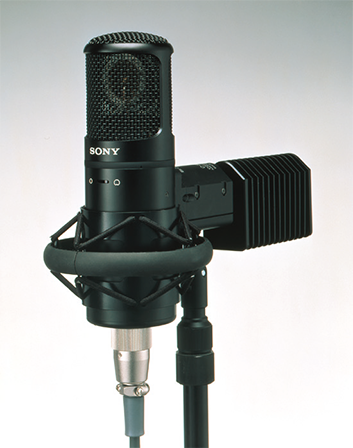 While producing microphones, Sony also promoted the development not only of audio but also consumer video devices, such as the video tape recorder (VTR).

On the other hand, Sony had been conducting research in digital technology for some time, including the electronic calculator SOBAX announced in 1967. Then, Dr. Nakajima’s team released the world's first digital audio system PCM-1 in 1977. It was a time when Betamax had been released as a household VTR, and this digital audio system was a device obtained by providing, to this Betamax, a circuit that can record and reproduce digital audio = PCM processor. This wave of digitalization was quickly accelerating toward the introduction of the CD format, which began production in 1982, and development was advanced by mobilizing all the technology in the company. Then, a 2 channel digital recording processor PCM-1600 was released the year after the introduction of PCM-1. This led to the release in 1981 of PCM-F1, which enabled PCM recording in combination with a VTR, and of PCM-1630, which became the de facto industry standard processor for CD mastering.

Convinced of the advent of the "digital era," Sony began selling the long-awaited 24-track digital multitrack recorder PCM-3324 in 1981. A 48-track version of that, PCM-3348, was introduced in 1988. Since it was possible to record another 24 tracks on top of a half-inch tape already used for recording with a PCM-3324, it was incorporated into almost all commercial recording studios. It reigned as the face of the studios until the 2000s, when DAW recording became the mainstream.

In addition, the presence of DAT as a master recorder is also worth noting. While it was originally produced in 1987 for consumer use as a replacement for cassette tapes, it grew in popularity as a master recorder, mainly in European studios. Because of its high sound quality achieved by 16 bit / 48 kHz, and its convenience, such as the ease of copying, commercial equipment such as PCM-R500 / R700 was widely used. 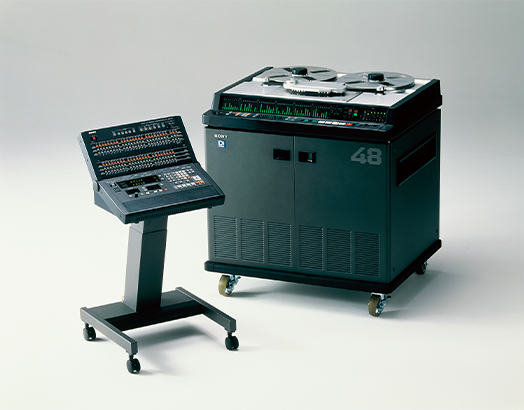 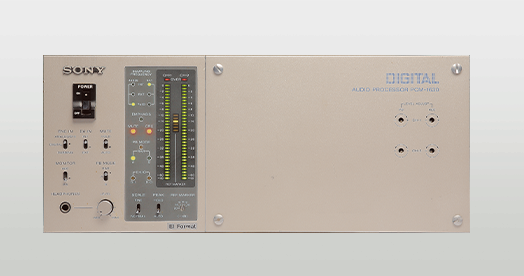 Master recorder PCM-R700 created by the originator of the DAT

Apart from equipment such as microphones and recorders, Sony also developed high-performance digital effectors. The catalyst for this was Japan's first digital reverb DRE - 2000 developed in 1981. It was made based on digital technology brought about by the development of professional equipment; thereafter, a digital limiter DAL - 1000 and a digital mastering device SDP - 1000, etc., were also announced. Furthermore, originally made for consumers, the digital reverb MU-R201 was also widely adopted by recording studios and professional musicians.

In the 1990s, in an era when people were shifting over from single-function effectors to multi-effectors, Sony chose a path different from other companies to develop multifunction single effectors. The first in line was the digital delay DPS-D7, introduced in 1990. With this as the springboard, Sony expanded the DPS series. The digital reverb DPS-R7, as well as the digital sonic modulator DPS-M7 and the digital filter DPS-F7, were also released in succession. These were all in a relatively affordable price range, and were often deployed as a set of four, from commercial studios to home studios, and gained a high reputation so as to be called the reference equipment of dedicated effectors.

While the DPS series was particular about being single-function, DPS-V77, which is an equipment that could be called the second generation model, was introduced in 1995 as a multi-effector. New effects were added to the algorithms of the four DPS "7" series, also accommodating digital I/O as an option, which improved both functional and sound quality aspects. It had sufficient potential as a professional equipment. In 1998, its successor, the 4 channel multi-effector DPS-V55 was also released. Furthermore, in 1999, the next generation digital reverb DRE-S777, which creates a reverb effect using sampling data, was introduced. In this manner, Sony's digital effectors have boasted unrivaled technology. 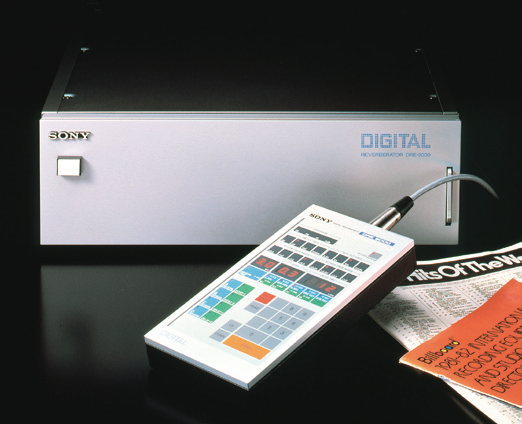 Sony, which had been promoting digitalization of music production through digital MTRs centered around PCM-3348 and digital processors for mastering such as PCM-1630, announced a mixing console for recording OXF-R3, which utilized full digital processing, in 1996. This equipment had an innovative interface equipped with the latest technology of the time, such as being provided with a DSP rack and an I/O rack capable of MADI transfer, and was greeted with a big shock when it was announced at previous year's AES. With this OXF-R3, Sony completed the digitalization of the recording environment.

OXF-R3 was developed in collaboration between Japan and UK's OXFORD DIGITAL. Once this console was launched in 1996, it was incorporated in recording studios in the UK and Japan, where its good sound quality and operability were appraised, and it would thenceforth coexist with analog consoles, as well as other companies' digital consoles that appeared later. The EQ section of the advanced technology of this console was later made into software as a plug-in effect, and released as SONNOX Oxford EQ. This is still being used as a standard plug-in with many loyal users.

In 2001, a digital console DMX-R100 was announced, developed based on the technology of OXF-R3 and feedback therefor. This was a 48 channel digital mixer equipped with 24 faders and accommodating 5.1 channel surround at 24 bit / 96 kHz, which attracted attention due to its top-level technology, such as its adoption of fader automation, touch panel display, built-in dynamics / EQ, and optional slots.

Sony made the standard monitoring equipment

MDR-CD900ST is a monitoring headphone boasting an absolute market share, from commercial studios to private studios in Japan. It was originally developed for the purpose of using at the CBS Sony Shinanomachi Studio (now Sony Music Studio), but was later released as a commercial studio-use headphone in 1989. Furthermore, after it was launched for the general public in 1995, it penetrated not only studio personnel but also many creators and musicians, and still has many loyal users as a standard monitoring headphone.

The reason why MDR-CD900ST gained much support is because of its thorough pursuit of quality and durability, required in the professional world, and its adoption of an independently developed driver unit. With it, it is possible to obtain a clear sound quality with the original sound image and little distortion, achieving a resolution suitable for monitoring. Also, although it can be said that MDR-7506, endorsed mainly in North America, is positioned as the overseas version of MDR-CD900ST, it was originally made for overseas studios, and it is different from MDR-CD900ST in sound quality as well as in the point that the headband is foldable and that a curl cord is adopted as the cable. It also has a large share in studios around the world.

On the other hand, Sony also made monitor speakers. Staring with the passive type near field monitor SMS-3, which is the closed-type, Sony introduced the compact, single unit SMS-1P in 1997, and the 2-way bi-amplified powered monitor SMS-2P in 2000. In particular, engineers who worked on Sony's “Presh series” radio cassette recorders, often seen in studios even today, were involved with the development of SMS-1P's amplifier, and, while being compact, its speedy sound was widely accepted for monitoring use by professional engineers, creators, and keyboard players. Although it has been discontinued, it is known as a classic piece of equipment still seen at various sites even today. 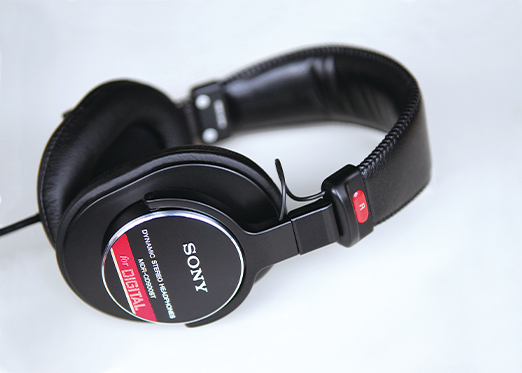 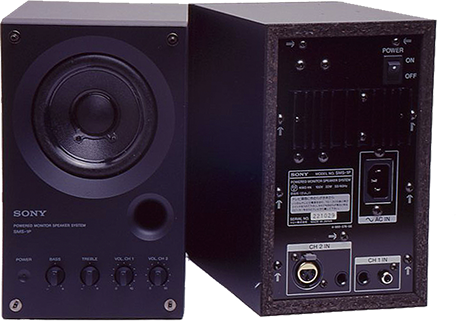 After year 2000, recording by DAW using computers became the mainstream, and recording specifications also started to be improved. As recording methods were being diversified, Sony released, in 2006, the portable recorder PCM-D1, which can also be used for field recording. While its weight was light at 525 g, it was equipped with a high-quality XY condenser microphone and was compatible with 24 bit / 96 kHz. It was lauded as a long-awaited professional device from Sony, a company that had appeared to be distancing itself from professional business equipment.

This PCM series was continued with PCM-D50 and PCM-M10, and then, with PCM-D100, which supports 24 bit / 192 kHz and 2.8 MHz DSD recording. Now there is also a PCM-D10 with an XLR jack that allows the use of an external microphone. Looking back, it is possible to trace the origins of these portable recorders to the "Densuke" tape recorders, which were produced in the 1950s. "Recording good sound" has been Sony's philosophy since its foundation. 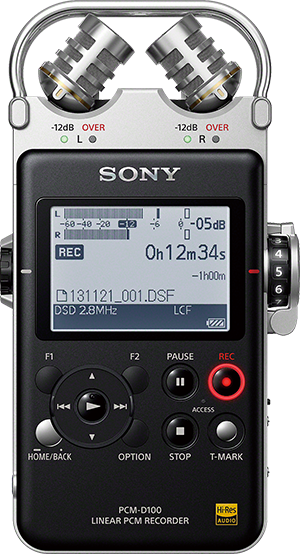 Sony has consistently been a leading presence in the music industry, starting with the production of the condenser microphone during its initial years, its digitalization efforts in the production of the CD in 1982, and its hi-res business, which leads up to the current era. And in the coming era of immersive audio, Sony will continue to provide creators with a production environment not only for consumer playback, but also for the production of their sounds.